Comedy Movies Where The Car Is The Star

The car is the star as we look at cars and films: both inventions came very much to the fore at the beginning of the 20th century and right from the get go made a fantastic partnership. Over 100 years later car chases and stunts form the backbone of many a blockbuster. Always fairly formulaic good guy / bad guy stuff but definitely guaranteed to keep our attention.

The team here at Same Day Couriers Direct do enjoy a good car based film on their rare days off from the highways and byways. Today we are going to have a look at some classic comedy films where cars are the stars and where better to start than with Laurel and Hardy, those early kings of the genre. 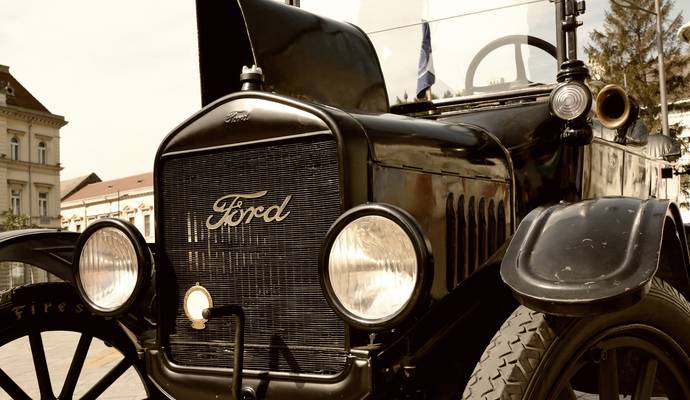 Laurel and Hardy used mainly Model T Ford’s in their films. Films such as ‘Perfect Day ‘, ‘ Hog Wild ‘,’Towed in a hole ‘ and ‘Big Business ‘ , all featured them driving a Model T which usually appeared ready for the junk yard.

In one of the last and funniest silent-era films, “Big Business,” (1929) Laurel and Hardy are selling Christmas trees out of the back of a Model T truck. When a cranky neighbour rejects their pitch and the tree is damaged, the pair takes it out on the man’s house as he inflicts like for like destruction on their vehicle.

A “Perfect Day,” (1929) Laurel and Hardy’s third talkie, features several gags on-board a Model T. When Ollie asks Stan to “throw out the clutch,” he reaches down and does just that. In the end, the car drives into a puddle that swallows the pair, their passengers and the car.

In “Hog Wild,” (1930) Hardy climbs a ladder mounted on Laurel’s Model T to install a radio antenna and Laurel accidentally drives off with Hardy still clinging to the ladder. In the finale, the car gets crushed between two streetcars like an accordion – and ironically, seems to run better for it.

Another gimmick Model T was used in the duo’s 1928 silent hit, “Two Tars.” In that short film, Laurel and Hardy create havoc in a traffic jam and then escape in their Model T into a railroad tunnel. The resulting unseen collision with a train causes them to emerge in a roadster that’s been squashed sideways – but still runs, of course.

If you don’t want to watch all the films, then this clip is a great taster.

The first Model T Ford to come out of production in 1908, it was the first mass produced car of its time. Over 15 million cars were produced in 19 years. It had the nickname of the ‘Tin Lizzie’. The 1908 model T Ford cost $1000 but by 1927 the cost was only $300 due to the increased numbers available thanks to the workforce turning a Model T out every 93 minutes! But only in black – Henry Ford (1863-1947) made the legendary “any colour so long as it is black” comment during a meeting in 1909.

The DeLorean is a rear-engine, two-door, two-passenger sports car manufactured by the DeLorean Motor Company for the American market from 1981 to 1983.

Noted for its gull-wing doors and brushed stainless-steel outer body panels, the sports car was also noted for a lack of power and performance incongruous with its looks and price. Though its production was short-lived, the car became widely known when featured as the time machine in the Back to the Future media franchise.

Hands up who hasn’t Back to the Future or one of the two sequels? The original was the must see film of 1985 and the time machine, aka a much souped up DeLorean with multiple fantastic additions and attachments, was the stuff of petrol head boys and girls everywhere. (Dads too!). 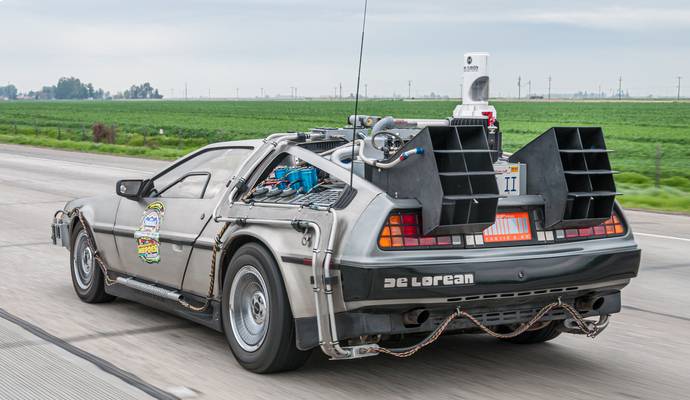 Despite the car having a reputation for poor build quality and a less-than-satisfying driving experience, the DeLorean continues to have a strong following driven in part by the popularity of the Back to the Future movies. An estimated 6,500 DeLoreans are still on the road.

This clip features all the DeLorean Time Machine clips from all 3 movies.

Hybrids have their place in comedy too

This car is the star, is it a car? The worst designed car in history? Probably – but also the silliest car in a film without a doubt. It’s fair to say that the 2015 Tartan Prancer is in a class of its own. Its’ creators seem to have set out to fashion the worst car in the world and succeeded. The accompanying ‘advert’ takes the absolute ‘mick’ out of the modern flamboyant mini epics we are now used to seeing from car companies.

As you can see in the video, the Prancer is a large MPV in the mould of a SEAT Alhambra or Ford Galaxy. There’s more than a hint of Toyota Previa about its profile and the headlamp clusters seem to have been lifted from a Land Rover Discovery. There’s a weird bustle rear end and a suspicious lean towards the rear, as if the front wheels are a couple of inches larger. The Prancer is also equipped with a hilarious array of comedy extras as the spoof Albanian car ad demonstrates. Door handles double as cup holders, there’s a drinking fountain, a CB radio and a detachable steering wheel. The car also has two sets of door mirrors producing a double reflection effect so the driver can check his hair and two fuel filler caps. Have a look at this rather funny promo video comparing the Prancer with the Honda Odyssey done in the style of motoring magazine reviews.

It was designed and built by legendary Hollywood car guy George Barris, who was responsible for the Batmobile from the ’60s TV series, among many other classics.

A bohemian classic where the car is the star 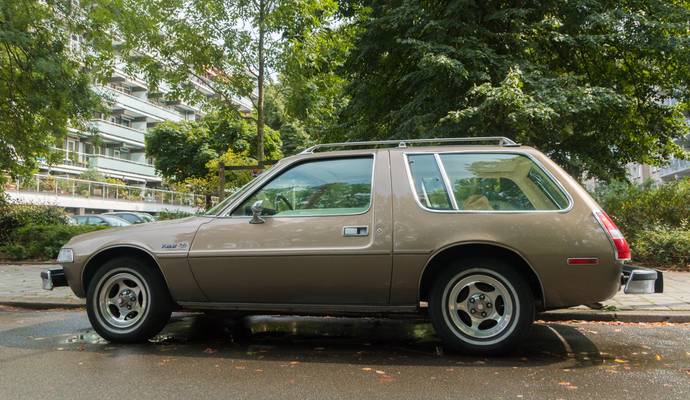 By the time that the 1992 movie “Waynes World” was made, the AMC Pacer was most likely to be the sort of vehicle young drivers would have sought out: quite cool and affordable. It’s not a good looking car by anyone’s standards and the design works just shriek 1970’s awfulness.

Design work began in 1971. The rounded shape and large glass area were unusual compared with the three-box designs of the era. The Pacer’s width is equal to full-sized domestic vehicles at the time, and this unique design feature was promoted by AMC as “the first wide small car.” The Pacer’s rounded and aerodynamic “jellybean” styling has made it an icon of the 1970s. The body surface was 37% glass and the 1976 issue of Car and Driver dubbed it “The Flying Fishbowl”. It was also described as “the seventies answer to George Jetson’s mode of transportation” at a time when US motor production was still rolling out boat-sized gas guzzlers.

A 1976 AMC Pacer Hatchback was used in the 1992 movie Wayne’s World, and again in the 1993 movie Wayne’s World 2. The car in both movies was painted bright blue with flame decals, with stock steel wheels and wheel covers in the front, and aftermarket chrome-plated steel wheels in the rear. It features a two-tone light blue-and-beige vinyl interior, as well as a liquorice dispenser mounted in place of the overhead light in the headliner. Although the car appears throughout both movies, it is seen the most in the introductory scene of the first Wayne’s World movie. Wayne Campbell (Mike Myers) inserts a cassette tape into the stereo of the Pacer, and Wayne and his friends sing along wildly to “Bohemian Rhapsody” by Queen.

Car is the star with the birth of a legendary ‘Bug’

Herbie, the star of the 1968 comedy film, sequels and forerunner of countless cartoons and TV series is a VW Beetle with attitude and surprises all round. This clip says it all really: good looking clean cut young American couple, comedy side kick, dastardly moustachioed baddy and the eventual happy outcome of the cute underdog overcoming all to win: a formula that never fails.

Enough about the plot, time for some Herbie facts.

Before the film entered production, the car star was not specified as a VW and Disney set up a casting call for a dozen cars to audition. In the line-up, there were a few Toyotas, a TVR, and a handful of Volvos, an MG and a pearl white Volkswagen Beetle. Apparently the Beetle was chosen as it was the only one that made the crew reach out and touch it – cute factor! 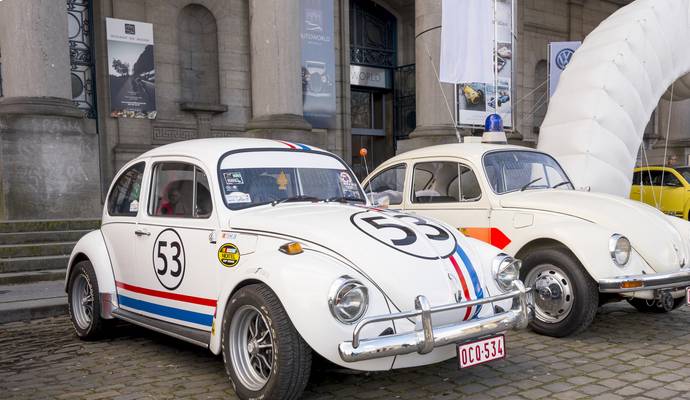 The Volkswagen brand name, logo or shield does not feature anywhere in the film, as the automaker did not permit Disney to use the name. Now was that a massive mistake on VW’s part and before their advertising became so slick? The only logos can be briefly seen in at least two places, however. The first instance is on the brake pedals during the first scene where Herbie takes control with our good looking hero inside on the motorway when Herbie runs into the dastardly baddies’ Rolls Royce, and future braking shots eagle eyed viewers will also spot he second instance on the ignition key.

The later sequels, however, do promote the Volkswagen name. The VW “Wolfsburg” castle emblem on the steering wheel hub is also seen throughout the car’s interior shots. Within the script, the car was only ever referred to as “Herbie”, “the small car” or “the Bug”—the latter, although a common nickname for the Beetle, was not trademarked by Volkswagen at the time of filming.

Herbie has his own cast billing in the closing credits, the only time this was done in the entire series of films.

Today, only a handful of the original Herbie cars are known to exist. Car #10 was recovered from a warehouse in Pennsylvania, and has been preserved—still sporting its original paint from the film.

Some fun ideas for viewing the car is the star movies if you haven’t seen these classic gems already. Or maybe like us, a reminder to watch them again. There are days when a little car magic might be handy at Same Day Couriers Direct to beat the jams. We’ll look at great film car chases for another time. Happy viewing folks!

In case you missed any movie posts from the past, you may like: Moving Trailers To Movie Trailers and Welcome To The Set – Delivery, Driving, Fun In Films!.