A street named Paradise may or may not be funny to some as humour is considered subjective. However, it gave us a chuckle, so we thought we’d look at any street name which we thought is funny, cheeky or even rude. Paradise could very possibly be in England, but it could be anywhere the sign comes up.

WARNING! Although place names are all accurately reflected, this post contains some names or language that may be considered offensive.

It’s not a new topic for us and some time ago, we wrote a post, Britain’s Quirky Sense Of Humour Depicted In Its Place Names. We’ve also taken A Journey Through Some Of The Most Unusual And Oddest Place Names and in this post, we look at place names but mainly street names, some may not be obviously funny but with the context explained, we found some hilarious. 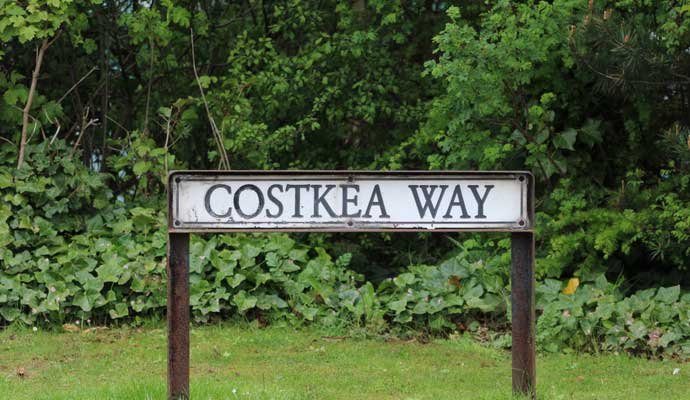 Costkea Way is where we will start. The sign can be found just outside Edinburgh.

So if you have Costco membership and they haven’t got the furniture you want you can move along the road and get that ready-to-assemble furniture, perhaps some kitchen appliances and of course, all your home accessories along the way!

By the way, do IKEA stores have any windows in them? Without natural light, you could get lost in time but you’ll probably lose yourself in shopping and feel better!
Hoorah! for retail therapy!

A street in the land down under

From Scotland we travel to Australia and a street sign with the name Bogan Place.

I don’t get it! Well, think Rab C. Nesbitt or Donk from Crocodile Dundee for starters then move on to the word bogan.

Bogan is a slang word used in Australia and also in New Zealand. Stereotyping? It refers to a low-class, often tasteless person who is seen wearing singlets (with or without holes), drives an ‘ute’ (utility vehicle) and generally behaves poorly.

Now you know why this sign is quite funny.

If you ever find yourself in Canberra, Australia, consider checking the street but perhaps dress to blend in! 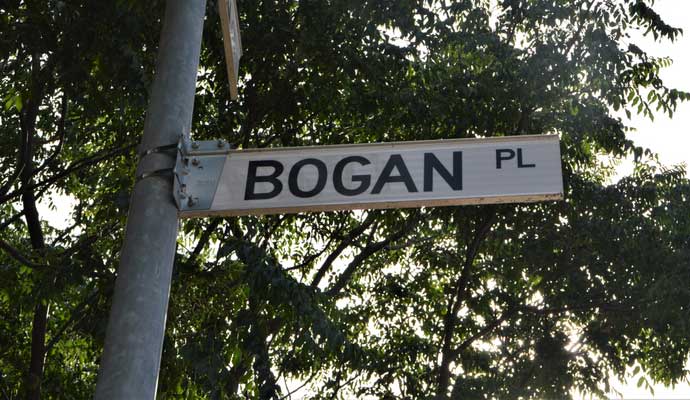 Any more for any more?

Does Crotch Crescent in Marston make you snigger? Perhaps Grope Lane in Shrewsbury or Mad Dog Lane in Yorkshire? All very British place names and there are a few more but we’ll leave those for you to have fun finding them on the internet. Finally, this one makes you laugh just by saying it, Ha-Ha Road, Greenwich! Perhaps for any fans of Nelson from The Simpsons.

Perhaps Halifax, Nova Scotia, didn’t have enough help in deciding some or something more exciting was happening but they have The Other Street and This Street not to forget That Street. Sounds like someone giving one of our drivers some directions.

The USA offers a few too, like Bad Route Road in Montana and for the hungry, Chicken Dinner Road, Idaho. If you’re bored, there’s Boring in Oregon twinned with our very own Dull in Perthshire.

If you’ve had the good ‘fortune’ to visit Hong Kong, you will no doubt have seen Fuk in the name a few times. The term refers to fortune but we seem to find it amusing. Is the word rude is it our thoughts? 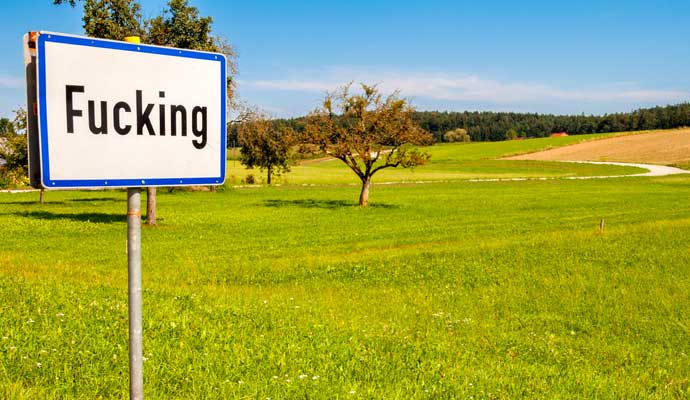 This village has been known by the name, for over around 1,000 years. How did it become popular for a small place? The village largely escaped the notice of the world but of course, with the internet, news travels fast, particulary if it involves an explicit place name.

Thieves often target this sign and usually it’s the tourists so the Austrian village has decided that ‘Fugging’ is more appropriate and closer to how it should be pronounced.

It is unclear what will happen to the current town signs but no doubt there may be none left to worry about if people keep taking them.

There are other nearby places of Oberfucking and Unterfucking but no stories have emerged as to their thoughts with any name changes.

Confession, we have been loose with our interpretation of street names but some of the town and village names were too good to skip!

Whatever the location, sensible, funny, silly or rude, we can help at Same Day Couriers Direct, just get in touch with our friendly team on 0333 772 1010 or complete our contact form.