TIME CRITICAL:
we collect and deliver from one part of Northern Ireland to another on the same day

WE COVER ALL OF NORTHERN IRELAND… 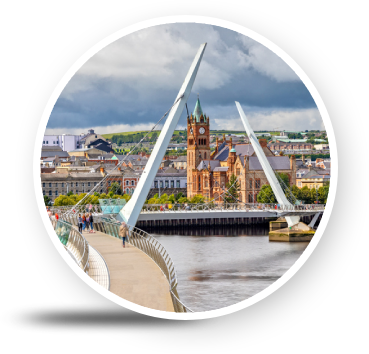 Although the UK’s smallest country, Northern Ireland has some important industries, including agriculture, aerospace (one of the top ten hubs in the world) and medical technology.

Belfast, as an indication of the capital’s economic importance hosts a third of the country’s population and is served by Belfast International Airport.

Other growing sectors include a creative sector, particularly in film, music and animation.

Northern Ireland is also strong in a number of other sectors including construction and financial services.

Belfast is still associated with shipbuilding as a key industry; the Harland and Wolff shipyard, which built the RMS Titanic, was the world’s largest shipyard. Belfast more recently has a major aerospace and missiles industry to go with advanced engineering and manufacturing, financial and professional services.

Northern Ireland’s construction workforce is predicted to grow to over 60,000 in 2022.