Self-driving Vehicles. Will They Become Common Place Within The Courier Industry?

Autonomous vehicles, artificial intelligence and robotics have recently become hot topics of debate within the media. Driverless cars and autonomous vehicles, will, we’re told, become an everyday sight on our roads and motorways. Self-driving vehicles certainly have the potential to disrupt industries, and in particular the logistics sector. So how realistic is the deployment of autonomous vehicles for logistics companies in the future? In terms of sustainability and the need to implement cost efficiencies, will self-driving vehicles become common place within the courier industry?

Self-driving vehicles for food deliveries is not a futuristic dream. In fact, several schemes are already up and running across America. Let’s take a look into how unmanned vehicles are delivering groceries in Arizona and discover whether the UK logistics market will need to follow suit.

Kroger partners with Nuro to use unmanned vehicles for grocery deliveries 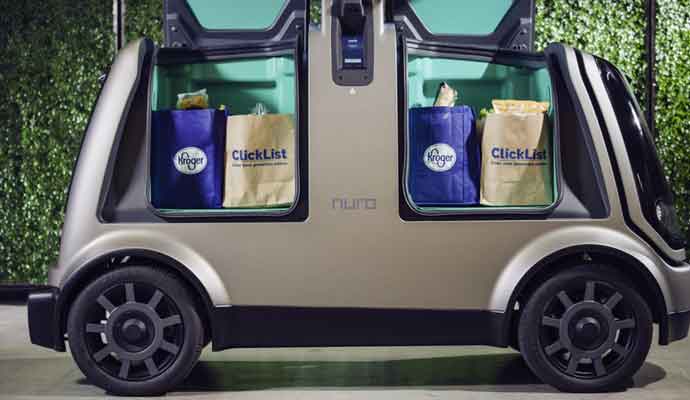 By revenue, Kroger is the largest supermarket chain in the US. It has over 2000 supermarkets and an estimated turnover for 2019 in the region of $121 billion. Clearly, an innovative and enterprising corporation. Recently it has partnered with Nuro, a Silicon Valley start-up, to deliver groceries via unmanned vehicles across Arizona, but has hopes to expand this service further. Customers can choose either same day or next day deliveries, seven days a week for a flat fee with no minimum order requirements, placing their orders via mobile app or website.

Lotte, the robotic car with a folding delivery arm

Designed by Estonia based technology firm, Cleveron, the Lotte is one of the only self-driving delivery vehicles which can complete deliveries without human intervention. It autonomously transports packages to homes and businesses and uses a folding robotic arm to place the packages in a Walmart pickup locker.

Cleveron intends to begin testing Lotte on Estonian streets in 2020. The theory behind unmanned deliveries is that replacing human labour is cost efficient and convenient for the customer. 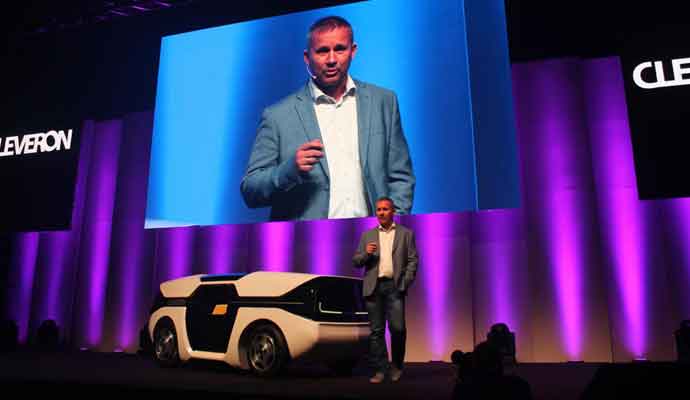 Designed by Estonia based technology firm, Cleveron, the Lotte is one of the only self-driving delivery vehicles which can complete deliveries without human intervention. It autonomously transports packages to homes and businesses and uses a folding robotic arm to place the packages in a Walmart pickup locker.

Cleveron intends to begin testing Lotte on Estonian streets in 2020. The theory behind unmanned deliveries is that replacing human labour is cost efficient and convenient for the customer. 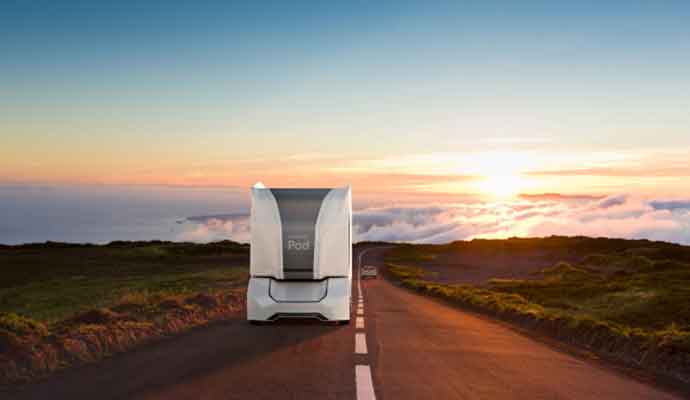 Einride is a Stockholm based transportation company with an eye to the future. Describing themselves as an intelligent movement company, their mission is to transform the transportation industry.Their all-electric T-Pod truck is fully autonomous and is set to launch across Gothenburg and Helsingborg in 2020. With no space for drivers or passengers, these pod like vehicles are approximately seven metres in length and can carry up to 20 tonnes of freight.

The future for autonomous vehicles poses some important questions. Courier service firms are anticipating change for ‘last-mile’ deliveries and the taxi industry too expects to see major disruption to its services.

One of the projects which could see fully autonomous vehicles on London roads by 2021 is a collaboration between Addison Lee, car and courier service, and Oxbotica, a software company bringing autonomous solutions. The aim is for all Addison Lee’s 4800 vehicles which operate in the capital to feature autonomous vehicle technology, initially to be used as minibus shuttles to airports, transport hubs and university campuses. 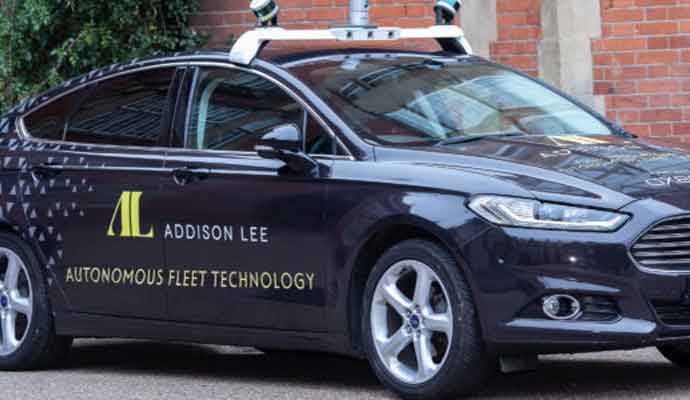 Self-driving cars have been hailed as the future of the taxi industry. Companies including Ford, General Motors and Mercedes-Benz are investing in the development of self-driving vehicles, and UK Chancellor, Philip Hammond has publicly stated that he wants to have ‘fully driverless cars’ without a safety attendant on board by 2021.

Although autonomous vehicles for deliveries and private taxis has government backing and initial pilot schemes have been successful in America and across Europe, there are still major hurdles to overcome in terms of practicalities as well as safety, security and customer acceptance before they do become common place within the courier industry.

For example, should an incorrect order be delivered, how would you refuse it? If you’re out when a delivery arrives, how are you notified? If goods are heavy, how do you get them inside? Are the elderly or disabled able to use these services if they’re unable to get their goods inside? The main advantage in using a courier service is their excellent customer service Would autonomous deliveries compromise this in any way?

In theory, driverless vehicles should be safer than those driven by humans, but have the safety implications been considered in full? Google’s Waymo and Tesla’s driverless cars have both had accidents in the past. How intelligent is the software? Could a computer programme decide between hitting a car or a pedestrian, ie make a moral decision? 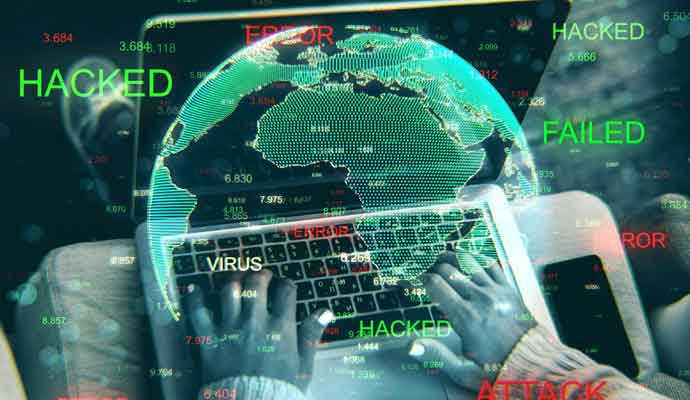 Safety through threats to security is another element which needs to be considered. Many large organisations have borne the brunt of software failure and data losses through both deliberate targeting and genuine failure of systems and processes. How secure are driverless vehicles? Could their software be hacked? The remotest likelihood of any cyber-attack threat would leave courier companies vulnerable to having their vehicles and contents stolen, not least the potential for a major road disaster. With no driver on board, what systems would be in place to counteract theft or criminal damage? Following on from that, where would the insurance responsibility lie – the vehicle manufacturer or courier company?

So are we likely to see self-driving vehicles within the courier industry?

According to Sky News, self-driving lorries have been given the green light for UK trials with the government having committed to an £8 million investment scheme. To some within the manufacturing industry, this may not come as a surprise. Software is already in place for semi-autonomous driving and parking. Self-driving vehicles are perhaps only one stage further.

However, much depends on the success of trials and pilot schemes, and the ability to iron out issues within the actual software. Whilst larger freight haulage companies who frequently cover large distances on intercontinental routes would probably benefit from having autonomous vehicles, it’s difficult to see self-driving vehicles having a great impact on the work of the smaller courier companies.

How industries respond to changes will be interesting to observe, but the human factor should never be overlooked. Customers like the personal touch. They look to courier companies for friendly interaction – it’s part and parcel of their very essence. Can you really replace a wave, a smile and a greeting from an established supplier? Who knows? Perhaps there’s room for both – driverless lorries for large multinational corporates, leaving courier companies to concentrate on the more personal, dedicated deliveries.

It’s by no means a cut and dried future landscape, albeit an interesting and exciting one. All companies within the courier, haulage and transportation industries must keep their customer needs and expectations at the heart of their operations and analyse the market carefully before investing wholly in any disruptive technologies. 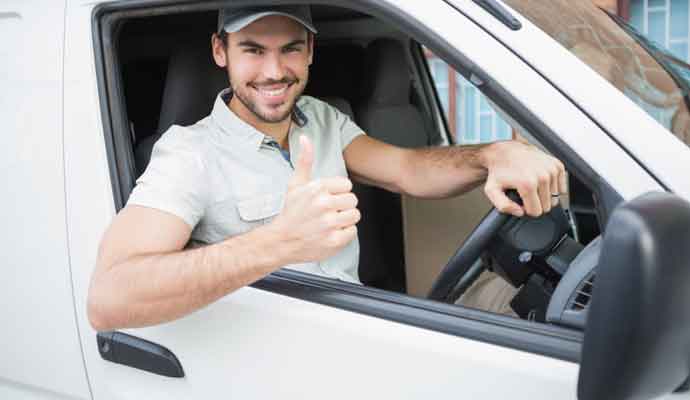 It’s by no means a cut and dried future landscape, albeit an interesting and exciting one. All companies within the courier, haulage and transportation industries must keep their customer needs and expectations at the heart of their operations and analyse the market carefully before investing wholly in any disruptive technologies.