Potholes – the bane of drivers everywhere especially here at Same Day Couriers Direct and no doubt all same day courier companies. They come, they get repaired, they come back, they get repaired again and they are a favourite topic on social media for local council bashing. But before we start laying blame at anyone’s door for scuffed wheel rims, damaged tyres, wrecked suspension etc. let us look at why they occur in the first place and what the future might hold.

Potholes always seem to be at their most prolific in early ‘Spring’ and there is a good reason for this. They are the result of ground water that has got under the road or pavement surface freezing and expanding.

Hands up who has popped a bottle of beer or soft drink into the freezer for a quick chill left it too long and it’s popped its top. It’s the same for road surfaces. The frozen water expands and has to make space – it’s the laws of physics. When it melts it naturally retracts but that expansion space has been left. Add traffic rumbling over the weakened spot and before long, it cracks, collapses and a pothole appears.

We all want the roads gritted in winter for safer driving conditions but if we factor in the salt from the gritters this just increases the pothole problem. Salt lowers the temperature at which water freezes (remember basic science at school?). The lower freezing temperature makes for an artificial freeze thaw cycle which allows more occurrences of the damage to happen. 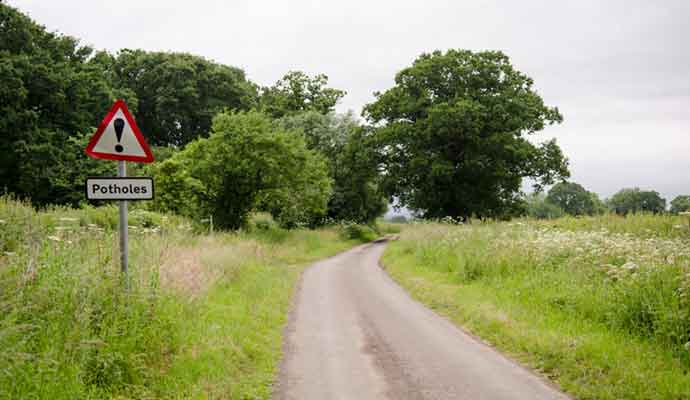 Why do they seem worse in ‘Spring’? As we know the spring weather is unpredictable with snow even at Easter not at all unheard of. The fluctuations of freeze / thaw are more prevalent and add in some harsh winter months as we have had this year and we have a pothole explosion in the making.

Indeed in 2019 – 20 local authorities filled 1.5 million potholes according to the Asphalt Industry Alliance (AIA). This figure apparently puts us at 37 in the world between Slovenia and Lithuania . In addition 700,000 complaints were received.

So we all hate potholes and no group more so than same day courier companies in the UK, especially those who have same day services and need every aspect of their delivery to be as smooth and efficient as possible. That means a fully operational fleet and no road repair hold ups on routes.

One would think that in a world brimming with enough technology to land a spacecraft with almost pin point precision on Mars, coming up with a long lasting solution to replace traditional road surfaces would have been achieved decades ago. Not so!

Asphalt and concrete are, and have been, the base materials for road building for over a century. They are a vast improvement on the previous surfaces such as cobble stones and gravel. Asphalt is made of sand, gravel and stone and uses bitumen as a binder. Asphalt and concrete account for somewhere in the region of 25 million kilometres of paved roads across the world. Both materials are very hard wearing and can cope with great weights and, to a degree, temperature fluctuations. BUT as we already now know, repeated temperature fluctuations cause the potholes.

There are also the issues of sustainability and cost. Bitumen is an oil product and is not truly sustainable long-term. Both asphalt and concrete road surfaces are also expensive to build and maintain. A pothole costs on average £60 each to repair. Do the maths for 1.5 million potholes in the UK we mentioned earlier – a staggering £90million. Indeed Kent County Council felt the need to publish a video on YouTube on how to repair a pothole. Perhaps to justify its road maintenance bill?

An article published here by Engineering and Technology explores some of the alternative road surfacing materials and it is worth a full read. We will quickly summarise though.

MacRebur founded in 2016 is a Scottish firm. They are taking household plastic waste and recycling this into pellets and flakes which are then added to the asphalt and a much reduced quantity of bitumen. Two hits at the sustainability issue. Trials have been successful to date and the end product appears to be more durable.

Aston University have taken the concept of recycling a step further and have experimented successfully with taking general household waste and heating to 500⁰C in a process called pyrolysis and have produced a black substance which shares many of the properties of bitumen. Indeed the team at Aston are confident of replacing bitumen altogether but trials haven’t been conducted in any depth yet.

American start-up company, Solar Roadways, is really looking to a bright future with solar panels than can be driven on and generate electricity at the same time. The application at present would most likely be limited to driveways and car parks but the company has won funding from the US Department of Transport and engaged in trials. With regard to the pothole issue, this technology is modular so any replacement should be a simple one man job! 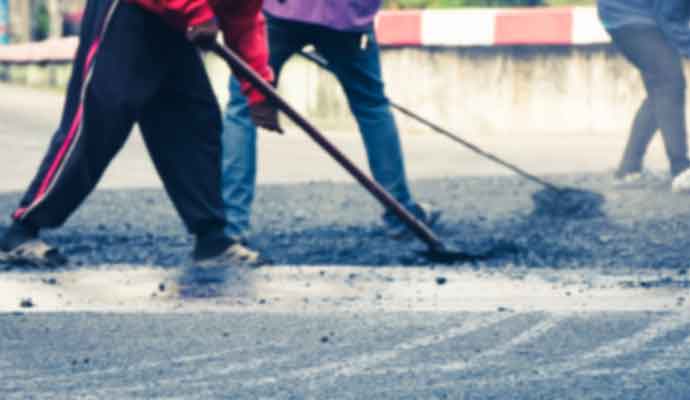 Dutch researchers at Wageningen University are working with an organic polymer called lignin which is also a by-product of the paper industry. In 2015 they trialled a 100m stretch of roadway with a mix of lignin and bitumen surface and it is still going strong despite being regularly used by cars and heavy lorries. This technology is still expensive though but the team are confident of breakthroughs.

Another Dutch team are working on 100% recycled plastic roads using materials that are currently incinerated. The plastic is made into hollow blocks which are not only easy to lay and replace but allow for cables and pipes to be easily laid and even water to run-off. Two of the main culprits of potholes from weakened traditional road surfaces.

Closer to home and perhaps a more immediate solution is being researched at Brunel University. The usual way to repair potholes is to use boiling hot asphalt. However, if the road surface is cold when this is applied the repair materials quickly cool creating a weaker bond with the surrounding materials. This leads to failed repairs in a matter of months. Brunel have developed the Controlled Pothole Repair System which uses a portable infrared heating machine to preheat the road surface before making the repair. The aim is to deliver repairs that last a lot longer than their current life expectancy. This will create better quality road surfaces that would make for fewer accidents and smaller maintenance budgets.

In the meantime what could you consider?

If you, not just same day courier companies, hit a pothole, especially at speed:

Consider pulling over when safe to do so. If you see any damage or the steering doesn’t seem right, consider getting your vehicle checked by a garage or tyre specialist as soon as possible. It can be costly and dangerous to ignore tracking or steering damage.

If you think you may want to claim either on your insurance or from the council, you’ll probably need some information. You’ll also need the information so you can report the pothole and help make the road safer for other drivers. Make notes and if anyone else saw it happen, consider getting their details too if possible.

Whether you think you’ll claim for damage or not, the first thing you should do is report the pothole. Here are some links 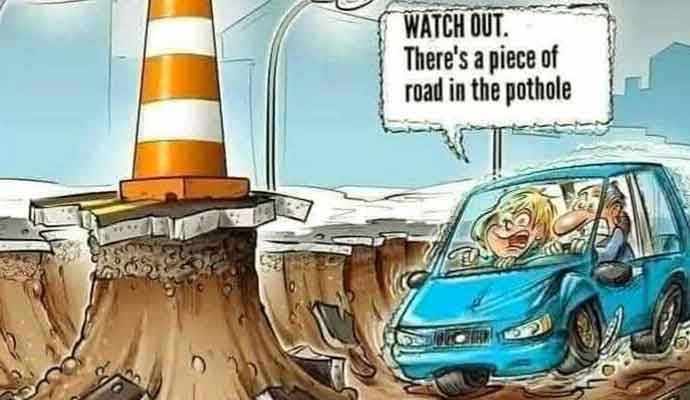 If you have to get repairs done it may be a good idea to get several quotes first. Getting a few different quotes can help compare prices. Keeping copies of all quotes, invoices and receipts may help to support a claim.

You might be able to claim compensation from the council for the cost of any repairs to your car. Consider writing to the council responsible for the road with the pothole on. Include all the details you’ve collected, like copies of your quotes, invoices and receipts if you think this could help.

Remember that the local highway authority can’t be held responsible for a pothole they didn’t know about. But councils do have a responsibility to fix large potholes if they know about them.

By law, councils must have a system to inspect and repair roads. The system will say how often roads are inspected, how big any road damage needs to be before it’s repaired, and how quickly repairs should happen. If you decide to claim and it’s rejected and you feel it’s unfair, you can consider an appeal.

The above advice isn’t only for domestic drivers, companies, especially courier companies can help report potholes and speed up the repair process. Same day courier companies across the UK are often in places and on roads that are less well travelled and reported on.